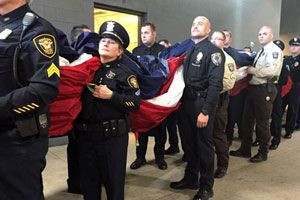 DPA to Dallas Cowboys: "Thanks for the Support"

The Dallas Police Association (DPA) would like to thank the Dallas Cowboys Football Club and the Jerry Jones family for their law enforcement tribute ceremony prior to the playoff game last month against the Detroit Lions. The Dallas Cowboys' pregame ceremony featured 200 police officers from several local agencies dressed in Class A uniforms entering the field holding a large American flag during the presentation of the national anthem.

The officers received a loud and emotional ovation from the fans, a sign of the overwhelming support enjoyed by national law enforcement in light of the murder of two New York police officers prior to Christmas. The 200 officers also were invited to watch the game from club seats as guests of the Jones family.

"The last few months have been tough on law enforcement across America, especially with the recent assaults and murders of several police officers," said Ron Pinkston, president of the Dallas Police Association. "The pregame tribute by the Dallas Cowboys and the Jones family is an incredible morale booster for our brave officers, who have dedicated themselves to protecting our neighborhoods. The emotional response of the fans proves that an overwhelming majority of the public supports our officers and appreciates our efforts to keep their families safe."